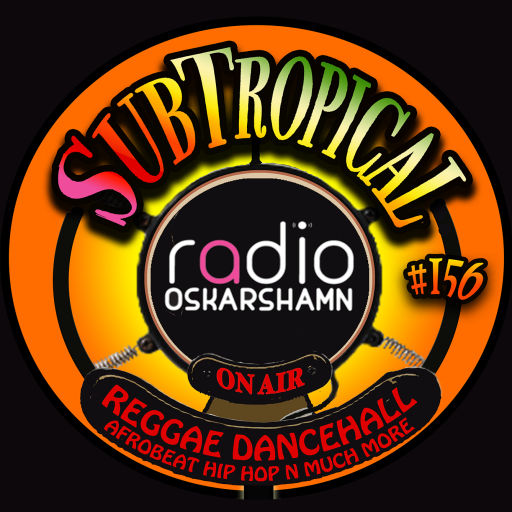 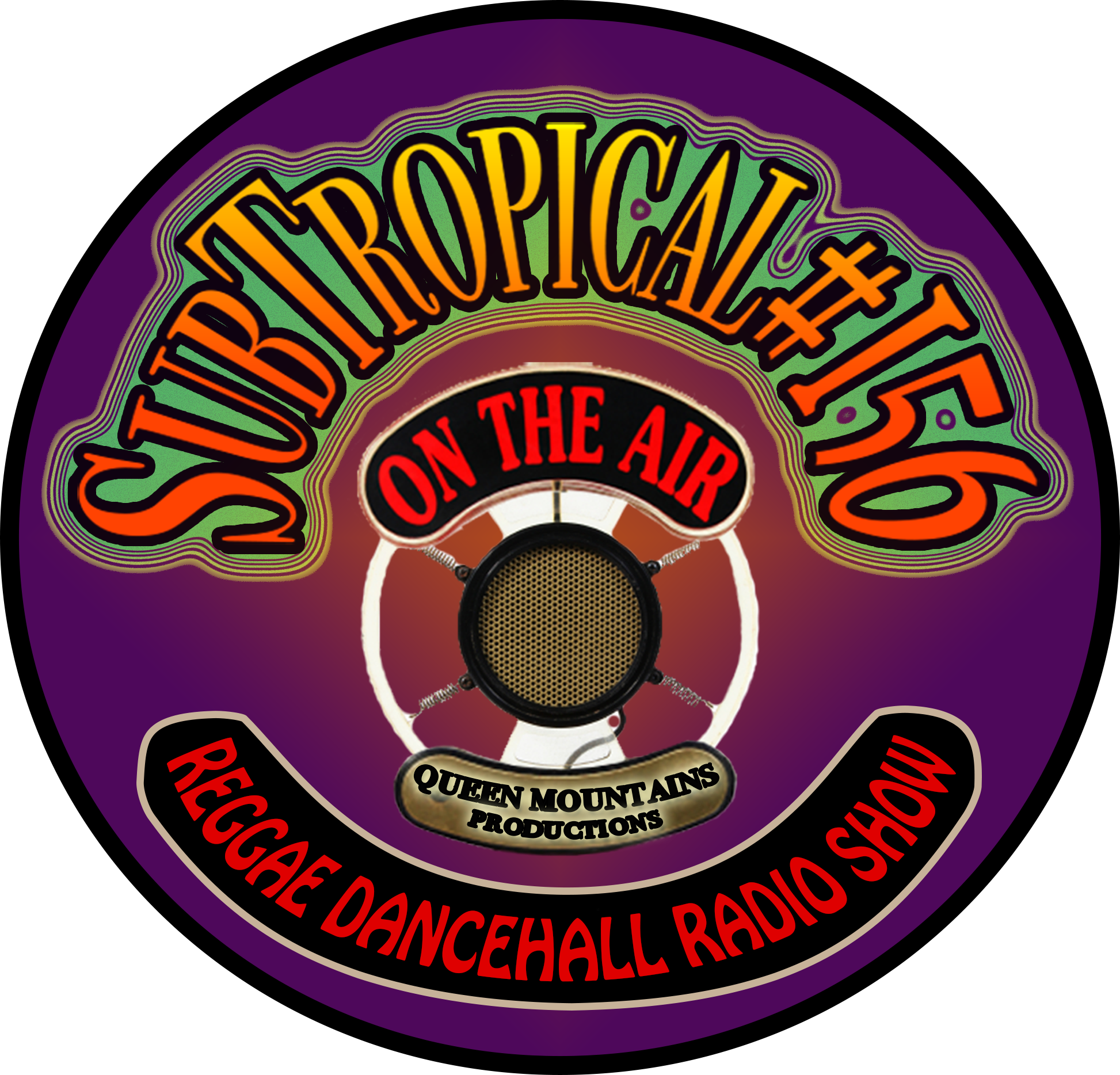 The show that went so big so that the local Radio Oskarshamn was taken over by Anna Olin Diaz 2018 january, and transformed into SubTropical Radio, Swedens biggest Reggae and Dancehall station!

Our most popular show SubTropical156 with DJ Anna Olin Diaz have now gone viral all over and the most listeners we have live on air and on FACEBOOK LIVE. Follow us on Subtropical and Anna Olin Diaz on Facebook to catch the live show. Also on Instagram  & YouTube

The show SubTropical#156 is produced and hosted by Anna Olin Diaz (also producer of our famous show Caribbean Fika Dub) Anna switch sidekicks now and then and right now the most frequent one is the mysterious Rabbit, looks like its in the show for stay. You Will hear vybzy music and get interviews from national and international reggae and dancehall artists all around.

It will be a very enjoyable show where you are going to go high up and around un the rhythms of the SubTropical subway train, where the rhythms, heavy bass and back beats will vibrate into your smallest cells! Do NOT miss this!

This below was written in the spring 2016 when the station was still Radio Oskarshamn. Then Anna Olin Diaz did not know that her new show for the station was going to go so far so it should take over the whole radio. Sure this station continue spread the good reggae music!!! World Wide!

”We on Subtropical Radio Oskarshamn continue to spread the Caribbean music around the world even if Mr Fika Dub from Our no 1 show, Caribbean Fika Dub, can’t do it anymore because of his death, We Can!!! Mr Fika Dub’s wish was for the station to continue spread the good words of life and play reggae and caribbean music, for the world through the vibes of Radio Oskarshamn. Caribbean Fika Dub, was Ariel Diaz Garcia, so this is no try to do the same. We will do it in our way, with his strong memory present. And NOW we have found out how we will do it. Welcome Subtropical156”

DOWN you find the links to the podcast of SOME EARLY subtropical 156shows, but because the show is most popular live, theres no reason for more podcast for now. You find the more resent shows on Facebook, n on replay at the radio regular airtime.

SubTropical#156 Anthony B Interview Interview with Anthony B by Anna Olin Diaz in SubTropical#156 Radio Show for Radio Oskarshamn at the swedish reggae festival Öland Roots july 14th 2017. Anthony B has just done the most incredible show at the festival. The audience where like commanded by Moses. Anthony B speaks about healthy life, to love yourself, don’t worry and so much more powerful speech from this man. Don’t miss out on this interview! It can change your life.
Artist: Anthony B
Producer, reporter: Anna Olin Diaz
Queen Mountains Productions
Radio Oskarshamn 2017 july

SubTropical#156/24 Equal Rights? SubTropical#156 with Anna Olin Diaz och Roberth Walve at Radio Oskarshamn. This show almost all about Oral Sex!! and Equal rights in and outside the bedroom. We talk about Ishawnas new song Equal Rights and all that have come with it, Kiprich, Don Vital, Prince Pin, Ninja Man, Menace Darkead, and many more! WIcked Show!! What we say, do what u like in the bedroom and with your partner as long as no force or violence is involved and you dont hurt no one. And also dont push your oppinion on no one, just because u here a song that dosent mean that u need to do as it say RIGHT?? Equal HUman Rights to express your mind trhrouh Music Words n Actions.Producer, host & Selector: Anna Olin Diaz
Sidekick: Roberth Walve
Radio Oskarshamn 2017

SubTropical#156/22 Interview with Singer Jah In this show number 22 of SubTropcal#156 you get an interview with the artist Singer Jah that Anna meet in the streets of Half Way Tree, Jamaica, in the summer. We play Team Jamaica Bolt For Gold by Singer Jah. Youll here many big tunes by Capleton, Menace Darkead, Loyal Flames, Konshens, D-Major, U-Roy, Meta and The Cornerstones, Antony B, Barry Brown, Scientists, Exco Levi and many more! Enjoy Life and Brake free!!
Producer, Host and Selector: Anna Olin Diaz
Side-Kick and Selector: MArcus Cheeemaker Christersson
For Radio Oskarshamn 2016

SubTropical#156/20 Just the love of this Music The Cheezemaker and Anna do the it right. Some new dancehall tune from Menace Darkead, some request, Youg Dillinger, Big Youth, Israel Vibration, The Pioneers, Mad Cobra, Max Romeo and alot more. Enjoying the Music to the top. Thats what tis Music is all about…spiritual vibration to the inner of your bones and mental frequenzes! Reggae Music people!! Pure Love.
Producer, selector & host: Anna Olin Diaz
Side-kick and selector: Marcus Cheezemaker Christersson
Radio Oskarshamn 2016

SubTropical#156/19 Interview with Kozmik Consciousnez In todays show you’ll get an phoneinterview with the Jamiacan artist Kozmik Conscioucnez! He spread his philosopy of Life and his great Music that is going to reach faaar. More wicked Music, requests and even Winner of a soldering iron. Listen and enjoy!! BIG UP UP to KOZMIK CONSCIOUSNEZ!
Producer, Host & Selector: Anna Olin Diaz
Sidekick: Roberth The Boss Man Walve (Normaly Marcus Cheezemaker Christersson but he was busy today)
Radio Oskarshamn 2016

SubTropical#156/18 Clinton Fearon do the CheezeMaker! CLinton Fearon have made us som incrible drops!! He make ”Marcus the Cheeze Marcus Maker”. So from now on Cheezeboy is Cheezemaker! We have interviews with Stacya Fyah och Gryzzly Grym Minister from Halv Way Tree, Jamaica. And alot of greeeeeeat Music like Always. Follow us on Facebook SubTropical156 for video and info and alot of fun.Producer, Selector & Host: Anna Olin Diaz
Selector & Sidekick: Marcus the cheezemaker Christersson
Selectror & Historian: Yadir Fidalgo Trujillo
Radio Oskarshamn 2016

SubTropical#156/17 In this show Cheezeboy return to the studio and The oss Man and Cheeze gets gift from Jamaica. You hear interviews with DJ Don Kingston, the chef of the Rastarant King David and the bead work and tam seller Rasta man Jah City. Ofcourse you get a lot of great Music and requests. In this show Anna gor both The Boss and the Cheezeboy to dance to some dancehal and she got it on tape. Chech it out on instagram and facebook Subtropical#156. Enjoy!!

SubTropical#156/16 Anna returns to studio 1 from Jamaica! This is so big so the station manager ”The Boss Man” enter todays show as a sidekick! Wicked!! Interviews with a Jamaican police detective and DJ K Kerr. A lot of dancehall and reggae and uprising, hilarious conversations between those unique personalities! Arists like Vybz Kartel, Menace Dark-Ead, Nesbeth, Bob Marley, Erroll Thompsson, Shaggy and many more!

SubTropical#156/15 Öland Roots part 2 The second and final part of SubTropicals cover up from the Öland Roots festival! Interviews with MILLION STYLEZ, PARTIET, THE JAHNAMAN BAND & REGGAEONEN. A wonderful ending if a amazing SubPerbical festival!! Anna will go USA and Jamaica for a month so SubTropical will be back again in september, with a lot of new hot stuff! You can Listen DJ KERR Dancehall mix and replays of SubTropical and Caribbean Fika Dub all august! Find all pods here on mix cloud or www.radiooskarshamn.se

Anna & Darren are still vibrating from all the good energy at the Öland Roots Festival. Listen to them, good Music and great interviews with the artists TWANG SYSTEM, ESSA CHAM and DANIEL LEMMA. We Also welcome and introduce DJ K KERR from Jamaica that have done us a great DancehallReggaeMix that finishing up the brilliant Subperbical show of today! Enjoy! And all thanks and the biggest UP to ÖLAND ROOTS, all artists and all visitors that made the most wounderful festival! Next week we continue with more interviews and Music from the festival, and more Dj K KERR.

BIG Thanks to Alexander Perlheden from LR-FOTO.SE that let us publish his photo of Twang System!! (the two placed down in the collage).

SubTropical#156/13 Mr Fresh CheezeBoy have some problems today, whit his Machines and whit is hearing and with his…yeah..Everything. But the Music they play dont have any problems! Great Like Always

SubTropical#156/12 The Danish Trust  Today you get some delicious danish pastery, reggae Music and talk about trust, love punishment and private Courts.

SubTropical#156 — the return #10 Back after 2 weeks. Nothing special to say more then that we play good Music for you. We hope you enjoy it. Thank you!

SubTropical#156 The Reggae Animal Show #8 Welcome to the reggaeanimal show! In this one Anna and Marcus only play tunes related to animals in someway. Get ready for a wicked show with alot of great sounds and Music.
Host, Selector & Producer: Anna Olin Diaz
Sidekick and Co-selector: Marcus Christersson
Co-Selector and Historian: Senor Yadir Trujillo Fidalgo
Radio Oskarshamn 2016

SubTropical#156 Still my love #7 A great mix of SKA, Rocksteady, Reggae, Dub and even Dancehall today. Always enjoyable with Anna and Marcus. Some bloopers from Marcus today though, but its okey because he is ”still our love”!

SubTropical#156 Dirty Hands #6 Anna tries hard to brake Cheezeboys pittyfulness and in the end she almost make it when he finally show off his Dirty hands! She let him pick out alot of the Music today so beware.

SubTropical#156 The Ginger Soldier Show #3  Many reggae soldiers and warriors enters this 3d round of SubTropical and Cheezeboy gets to try a for him new drink, but hes a bit to weak for it. A big mix of crispy and grounded walking bass sounds from very old to more new reggae and rocksteady records! Greeeeeat like always!
Selector, host & producer: Anna Olin Diaz
Sidekick & Co-Selector: The Cheezeboy Marcus Christersson
Co-Selector & historian: Señor Yadir Fidalgo Trujillo
Radio Oskarshamn 2016

SubTropical#156 The Smelly Pity Show #2 In this second round of SubTropical mr CheezeBoy do The smelly Pity Show! And Anna do her best to fix the situation and maybe she succeed. They play a great mix of the beeeeeest reggae music for you.
Host, selector & producer: Anna Olin Diaz
Sidekick & Co-Selector: Cheezemaster
Co-selector: Señor Yadir

SubTropical#156 The Premiere Show  The Premiere Show of Radio Oskarshamns new Reggae Show SubTropical #156. This show is wicked and you will get to know two of the three selectors that do a great first show of this succés to be! Listen and enjoy!
Host, selector & producer: Anna Olin Diaz
Co-selector & Sidekick: The Cheezemaster Marcus Christersson
Co-selector: Señor Yadir